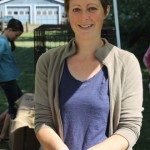 Bianca Seay, of Silver Creek Institute, holds seed bombs she’s made from flower and vegetable seeds and soil. She sells them at the Two Harbors Farmers’ Market. Seay says the bombs are thrown into a green space at random. She calls it a form “guerrilla gardening.” 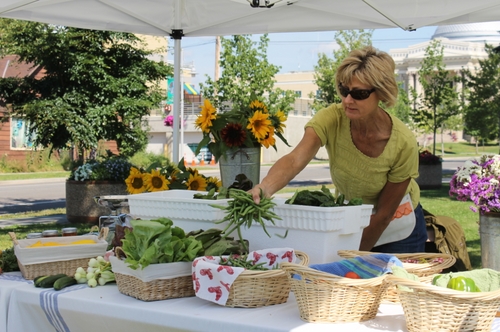 Monica Highmark of New Song Farm refills her basket of green beans at the Two Harbors Farmers’ Market in Thomas Owens Park Saturday morning. She also sells a variety of cut flowers, homemade jams and baked goods. Most market days she has fresh chicken eggs for sale, too.

Blanca Seay and Alex Deters of Silver Creek Institute are just two of the farmers and craftspeople who sell the fruits of their labor at the two Harbors Farmers’ Market from 9 a.m.-12 p.m. on Saturdays. 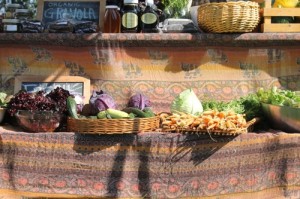 Melissa Borer and Kevin Hard sold their homemade Gnarfoods granola, honey, maple syrup, wild rice and produce at the Two Harbors Farmers’ Market. The pair grow vegetables on four plots in Duluth and are part of a community of other area growers and harvesters. 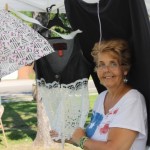 Kim Svaboda recycles and repurposes clothing and vintage linens. Here she shows a vest she designed from items purchased at thrift and resale shops. She also makes reusable grocery bags and a variety of other items.

Among the many vendors were Kim Swartout and two of her four children selling produce they grow at Valleyview Farm. So far the season’s yield has been small, but Swartout is cautiously optimistic.

“My gardens are finally producing something. I’m so afraid we’re going to get hit with a frost, but I’m so excited that it’s a nice day,” she said. In addition to vegetables, she has raised beefalo for six years and has a waiting list of customers who buy the high protein, low-fat, low-cholesterol meat.

Monica Highmark of New Song Farm in Two Harbors, had a broad array of colorful jars of jam, with beans, lettuce,swiss chard, tomatoes and bright yellow sunflowers from her gardens. She also sells eggs and baked goods. Her busy stall was a one-stop-shop for the season’s treasures.

Sawtooth Apple Cooperative members, Susan and Kristiana Jordan, were selling apple garlands and caramel treats among other items. In years past cooperative members would be awaiting the apple harvest and looking forward to pressing cider. This year, however, the late frost froze the apple blossoms, said Susan Jordan, reducing the amount of fruit, but not the group’s enthusiasm. She said coop members will press the fruit they have at harvest time. The coop was founded by Jan Errickson and her late partner, Marek Fuller, who passed away in March.

“I’ve never seen anything like it,” Errickson said of this year’s sparse crop, “everyone says the trees are mourning him. I’m hoping we can at least press once because it’s just so much fun.”

Kim Svaboda who lives just south of Two Harbors, displayed repurposed clothing items at her booth. Her unique pieces include t-shirts made into reusable grocery bags and denim vests redesigned to include vintage linen elements.

“I don’t like to throw things away,” she said, adding that she buys the bulk of her materials from Savers and Goodwill and enjoys the creative process, as well as the social aspects of the weekly gathering of crafters, farmers and community members. Svaboda shares her booth with paper artist, Carol Svihla, who makes themed greeting cards. She creates collages of words and images, many with humorous, but inspirational messages for women battling breast cancer.

Katya Gordon, who recently returned from a year-long sail to the Caribbean with her family, now sells her homemade breads at the market and would like to turn her love of the loaf into a money-making

“My goal is to be a weekly bread seller. I’m hoping to have a home business,” she said, adding that her breads appeal to customers who appreciate healthy whole-grain loaves.

Two Harbors Farmers’ Market organizer Heather Jellum said the roster of vendors has increased, as has the number of customers.

“It’s been great this season. There are more customers and repeat customers this year. We’re getting more vegetables now and it’s picking up,” she said. “We’re hoping to go into October if the weather holds out and we’ll be having a harvest festival the third week in October in the park.”

The Two Harbors Farmers’ Market takes place Saturdays from 9 a.m.- 12 p.m. For more information, visit the website at http://twoharborsfarmersmarket.com where you’ll also find information about other markets and resources.